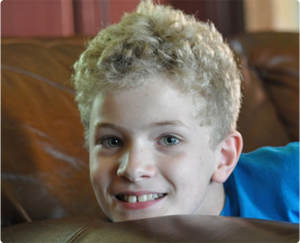 Almost two years ago, my parents noticed that I was having trouble walking straight and sometimes I would just fall down. So, they took me to a bunch of doctors who ran tons of tests. DNA tests confirmed that I have a very rare genetic mutation called Giant Axonal Neuropathy (GAN).

I’m sorry to say that a few months after my diagnosis, we found out that my eight-year-old sister, Lexi, also has GAN. While she has no visible signs of the disease yet, we both face the same fight. Lexi and I both have the tell-tale curly hair that is common with kids with GAN. So, while my parents held out hope that she didn’t have GAN, the tests proved otherwise.

My fraternal twin brother, Jared, doesn’t have the disease but he is a carrier. We couldn’t be more different. I have curly hair, he has straight. He likes to get up early, I like to sleep late. He likes to exercise; I’d rather play video games. My parents say we fight each other just because we can.

Unfortunately, GAN comes with a fatal diagnosis (which is why it’s mostly kids and a few young adults who have it). That’s a big pill to swallow. But I’m a fighter and that’s why I started this page. Up until five years ago, there wasn’t even any research being done on this. I am one of about 50 kids in the world who have this disease.

I am lucky because my case of GAN is mild so far. Most of the other kids are not as lucky and more often than not, GAN wins. But with your help, we can beat GAN. I need to beat GAN.

Our biggest challenge with research is that there is no Federal Funding for this disease because it isn’t an epidemic. There are no celebrities or telethons raising public awareness. In fact, there is only one charity, Hannah’s Hope Fund, which is raising money to fight this disease. It was started when the parents of a four year old girl named Hannah found out she had GAN. Over the past 5 years they have raised significant money for research, but they need more. I need your help.